First off I must apologize for not updating the blog in so long, but we have been down to plot 103 and have been harvesting carrots, cabbage, potatoes and french beans and peas for the last couple of weeks which have all been delicious when eaten fresh and frozen when there has been too much to enjoy at its peak. Things are beginning to slow down up in Annamoe allotments as its coming towards the end of the season and so begins the new one as we start preparing our beds for next year. There is still a good bit to come yet though and we are still waiting for our onions to 'fall over' which signals that they are ready for pulling up. They are small, due no doubt to the poor soil, but we did pull some red ones which were full of flavour in a ratatouille and we're looking forward to our white ones over the coming weeks. Our raspberries are putting on another show of fruit and these ones are huge compared to the berries we got earlier in the summer. As soon as the last fruits have been picked we'll cut the canes down to the ground and new ones should sprout next spring and provide us with a bigger harvest. We will probably invest in a few more canes over the coming months to supplement the 2 we have. Their flavour this time round is not quite as strong as last time however this could be due to the fact that the plant has already fruited this season and its probably a little tired now as the days get shorter. I'm also not sure if its a summer or autumn fruiting type as we've gotten fruit in both seasons! I'll have to do some research. Now if only I could find the tag that came with them!! 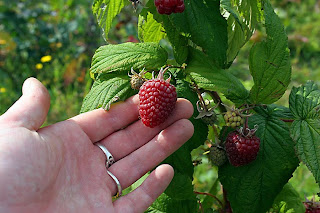 We pulled the last of our cauliflowers a couple of weeks ago which was once again very tasty, and although small were definately a success. 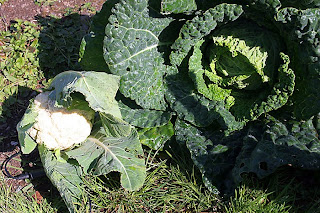 Our Cabbages are also continuing to provide us with fresh head every week and we've still a good few weeks supply left for the remainder of the season. The cabbage seems happy enough to stay in the ground until its needed and so far has not shown any signs of going to seed so we'll keep harvesting as needed. It does however have to fight with the weeds which we've given up on at this stage due to the end of the season. 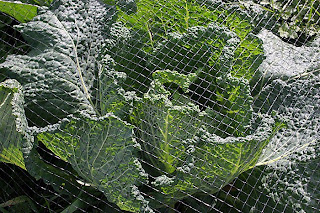 Our sprouts are buttoning up nicely!! and the plants look as healthy as ever, even though they are squashed in the nets I am still wary of taking the nets off as there are still a few butterflies about and poor William the allotment guru's brassicas have become covered in cabbage white caterpillars which are feasting on his purple sprouting broccoli. So my nemesis, the butterfly, is still a little too active for my liking. Our sprouts look like they may be slightly early for Christmas but they freeze well and will still hopefully taste great on Christmas day sauteed with some garlic and chopped bacon with perhaps a few roast chestnuts thrown in for good measure. 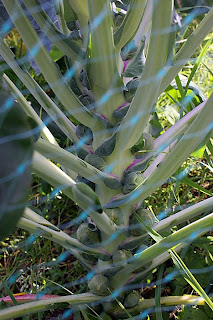 The sweetcorn now has lovely healthy tassles and cobs are forming large and healthy on every plant. When the tassles go brown the cobs will be ready to start looking at the kernals to ripen. According to my a-z of allotment vegetables book, when the tassles go brown peel back a little of the covering and squeez a kernal gently. If the resulting liquid is clear, the cobs are not yet ripe, if the liquid starchy cloudy and thick they have gone too far. Somewhere in between is just about right, still a liquid but slightly cloudy. Sweetcorn takes up a lot of space for quite a long time so I'm yet to be convinced that it is the most efficient use of so much space for such a low yield of only 2 cobs per plant, but we'll wait for the taste test before we decide if its worth growing again next year. 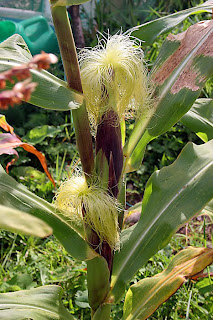 Our pumpkins unfortunately have officially been a failure. They have now got powdery mildew, are looking very sorry for themeselves and still no pumpkins formed. At this stage its far too late in the season for pumpkins to form and ripen. One did attempt to form but doesn't seem to have gone much further than a cricket ball sized deformed swelling. I suspect they may have been planted a little too late in the season and are not too fond of the slightly colder weather up in the wicklow hills, but we may try again next year and now that we have the full season will be able to start months earlier. 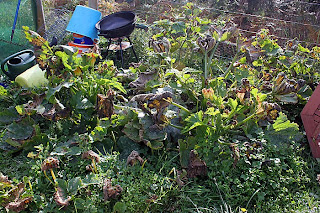 Now that preparation for the new season is upon us we got stuck into digging last weekend. It's garlic time!! So I got to indulge in my weakness for garden centres without Cillian trying to drag me out by the hair, although I'm sure he considered it when Id chosen not one, but 5 varieties of garlic after I couldn't decide, considered a sixth and sneakily threw in some shallots on my way past the stand for autumn planting alliums! Now understand I absolutely love garlic, I put it in everything and can on occasion easily go through 2 bulbs a week. So I really do need 5 varieties of garlic!! yes....I do.....really.....! The varieties I've chosen to grow are Germidour, a mild garlic supposedly good for roasting, Thermidrome, a full flavoured large cloved garlic which is supposed to be very reliable, Cristo, considered the garlic of choice for chefs due to its excellent flavour and can store for up to 9 months!! so will keep you going almost until your next lot are ready for harvest, lautrec white, which is well I'm not sure, supposed to be good but at that stage I was caught up in a seed buying frenzy and completely lost sight of anything other than buying more garlic, and the previous week it had been sold out and this was new stock. So if it was good enough to go out of stock that quickly its good enough for me to absolutely need it to go into our garlic beds this year, and finally Iberian wight, possibly for the same reason as the lautrec wight. Although I believe the varieties ending in 'wight' are farmed on the isle of wight and are therefore acclimatised to the British and Irish climate so should grow well. I threw in some jermor shallots as at that stage I was just frantically grabbing anything that could be planted now and these popped off the shelf and strangely fell into my hand! don't know how they got there but they're going in. 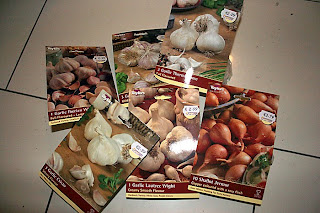 We dug the bed for the garlic, removed the weeds and put in some manure and a good bit of compost. We'll rake in some fish blood and bone fertilizer to tide them over at planting time until the spring, when we'll mulch with some more compost to keep the nutrients flowing. As I'm going to Germany next week with work, and Nebraska, USA the week after with work, it will be the middle of October when we plant the garlic cloves and shallots. Garlic needs the frosts of winter cold weather to split into cloves and form bulbs. So it can be planted any time up to November as it must have just enough mild weather first to form roots to tide it over the winter. If it doesn't have a good spell of cold frost after that, the danger is that the clove won't split and you won't get nice big bulbs, but rather one large clove more like a spring onion. So we're full steam ahead, with hopefully proper ground preparation and a full seasons growing this time I'm hoping for a bumper harvest next year. Now all we need to worry about is rust, onion root fly, white rot and any other potential diseases or pests, but at least our ground will hopefully have the nutrients to give us lots of great veg next year. We also dug up the last of the potatoes, our blight ridden roosters, which are small but have not shown blight in the tubers so are very tasty. This bed was dug over and lots of manure put in and covered with weed suppressing membrane to prevent any weeds germinating until planting early next spring. We've ordered lots of timber also which will be delivered to the plot over the next week or two and will then begin digging and preparing the remaining beds as the veg in them finishes up, edging them with wood to try and halt the spread of weeds from our 'sort of paths' into the beds, filling them with lots of manure and compost ready for next season. While our beans and peas have finished, our carrots and plenty of other veg is still going so its full steam ahead!
Posted by sharonl at 15:03