Well I'm finally back from my travels, I've spent the last two weeks travelling to conferences and training courses for work. I spent a week in Ettlingen Germany, came home for the weekend and a spot of allotmenteering and the following week was off to Columbus Nebraska, USA so needless to say the jetlag and travel tiredeness hit home fast. But I'll include a few photos just to prove that I was actually there and not skiving off the allotment or updating the blog. Ettlingen is a very pretty medieval town in Germany on the edge of the black forest and the first thing that struck me upon leaving the airport was the amazing use of every available patch of space for growing crops. Even the green spaces in front of industrial estates and the edges along motorways were crammed with the withering remains of neat rows of summer crops. We had a lovely location for the conference in Ettlingen castle the front of which is unusually painted to look like a highly decorated building but is in fact pretty flat and not as decorative and moulded on the outside as it would appear. The town itself was full of very pretty typically german buildings and cobblestone streets and in full seasonal spirit pumpkins and squash adorned the strees in abundance. 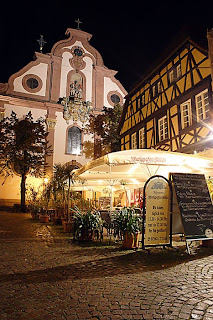 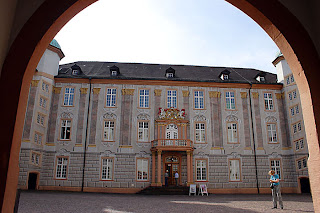 It was nice to see such an Autumn harvest theme associated with Halloween in both Ettlingen and in Nebraska, originally a pagan festival of the Harvest and signifying the coming of the new year, a display that seems to be sadly lacking in Ireland considering they grow relatively well here in our climate. Ireland has become very commercial when it comes to this time of year and its sad to see the old traditions fade and be replaced by commercial western glitz and glam. It has inspired me to perhaps try growing a few unusual shaped squashes and have another go at the pumpkins next year. This was a festive display shown outside my hotel in Nebraska, showcasing the seasonal harvest of corn, squash and pumpkin. 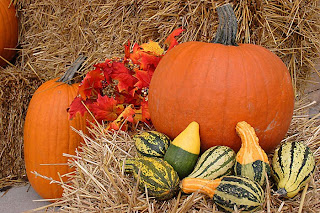 Unfortunately our own spooky purple halloween pumpkins did not fair so well up on plot 103 this year I suspect due to going in too late. At the weekend we surveyed the end of the plot containing the pumpkins and courgettes to find powdery mildew has completely taken its toll on the plants which have now withered and died. We dug up the plants to level the ground for our plastic walk in greenhouse for next year only for Cillian to notice something lurking in the grass on the other side of the deer fence by the river. We walked around and found that one of our pumkin plants, bravely making a break for freedom,had escaped through the fence with a long 10 foot vine containing a single immature pumpkin. Unfortunately we had pulled up the plant before we realised the extended arm containing the fruit. At this stage it would be too late for the pumkin to ripen anywayso we've resolved ourselves to trying again next year a little earlier in the season. 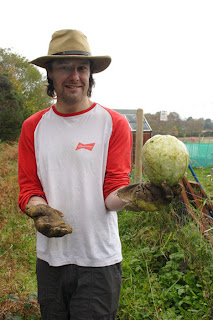 Our Brussels sprouts look ready and very healthy, I'm hoping for a bit of a frost over the next week or two before we harvest as I believe that makes them sweeter. They are definately a little too early to have for Christmas but I will post up a query on the gardenplansireland forum and see if the good people there can tell me how long I can leave them on the plant before they blow. If I can't leave them too much longer we'll harvest them and freeze them for Christmas, I'm sure they'll taste just as good and we'll be eating our own veg for Christmas dinner. They've proven to be one of our resounding successes with no problems at all through the growing season. 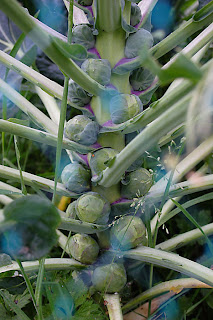 Over the last 2 weeks Lidl has had the autumn planting fruit deals going so I had to take advantage and stock up on our raspberry canes and we also bought two cherry trees 'stella', a desert type of cherry for plot 103. At E5.99 a tree, and E2.99 per pack of soft fruit canes I just couldn't say no. I bought 2 packs of 3 raspberry canes and one pack of 3 redcurrant canes so hopefully our fruit will be in abundance next year as our existing raspberry canes and strawberries will be in the ground a year and should give a better crop in their second year. 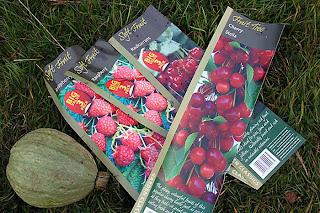 Here they are gracing the edge of plot 103 which will hopefully provide us with a 'soft fruit walk' for next year along the length of the allotment. 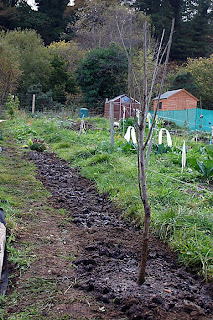 We spent the last couple of weekends preparing beds for next year as this years stock of manure has arrived on the site, so we're filling our nutrient starved soil with it and covering with weed suppressing membrane to enrich the soil over winter. The garlic and shallots are in with the help of my parents who took a trip up the allotment and were surprised to find out just how brussels sprouts grow. They were rewarded for their offer of manual labour with a few freshly pulled carrots and a savoy cabbage which we are still cropping in abundance.
Our onions are unfortunately very small, but should still give us something. I've bent over the tops in the hope that this will bulk up the bulbs a little, and then we'll start drying them. Our leeks unfortunately were an abismal failure and never got bigger than an elongated toothpick. Again, I think due to getting them in too late in the season. We'll try again next year and be able to sow them much earlier in the hope that they will be ready to plant out by June or July. Our 60 metres of 5x1 inch timber arrived on the plot, courtesy of Martin the allotment owner, which we got at a good price to edge the beds for next year and add a little structure to plot 103. We harvested the last of our courgettes which had turned into a marrow and tasted gorgeous stuffed and baked. Far from being what I would have thought of as a quiet time during winter in allotmenteering, theres a lot of work to be done on plot 103 for next year. Roll on harvest 2010!!
Posted by sharonl at 13:42