The onions are in!!

There was trojan work done on plot 103 this weekend and we're on a roll getting the place ready for some direct seed sowing over the next few weeks. As me and Cillian had to go to Ballina on Saturday overnight, Jemma and Eoin were on their own Saturday with their nephew Scottie who's 5 and found the digging too boring, but found endless things to do with his stick and ran manically around the plot waving it at anything that moved! somehow I don't think we'll have a problem with birds eating our fruit when he's around and the contract as a human scarecrow is being drawn up as we speak.

Jemma and Eoin got not one but two more beds dug on saturday, one for the carrots and parsnips and one for the leeks which we will start sowing from seed this friday during the nice day off from work I've secured. 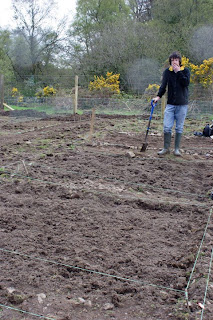 The 2 new beds roughly dug and ready to be raked before seed sowing.


Lidl had some great bargains during the week which I snapped up with a pack of 2 10x2m nets for 6.99 and some rhubarb plants at 3 euros each, so into the trolley went two of them. A 20m garden hose for 9.99 also made its way into the trolley.

On Sunday evening myself and Cillian made our way back up to dublin, picked up Jemma and went up to the plot for an hour of two to plant 12 strawberry plants which have flowers appearing already and needed to go in, 2 rhubarb plants, 2 raspberry plants which also have masses of flowers starting to appear, and 100 onion sets to put into the newly dug onion bed, or as many as we could fit given the 5 inch spacing recommended on the pack. We arrived to the plot laden with plants to cries of 'Cheat!, Cheat!' from our allotment neighbours, so I have to say I did feel a bit of a cheat bringing relatively established plants bought in Lidl, Atlantic homecare and Johnstown garden centre as everyone else dilligently sowed everything from seed. But since its just the fruit plants that are established and everything else is being sown from scratch I think we can be forgiven for that.

We planted approx 70-80 onion sets in the new onion bed, I love onions! and use an awfull lot of them so this amount doesn't scare me. 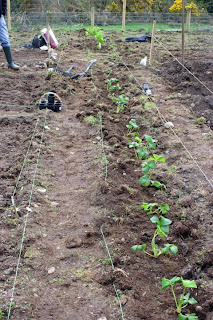 We planted the 12 strawberry plants in one row alongside our 'sort of' path. 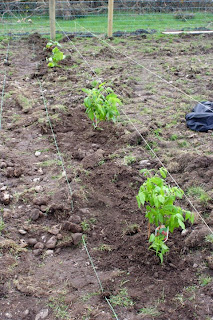 Two healthy raspberry plants gone in and will be staked eventually with some wire accross the back for support. 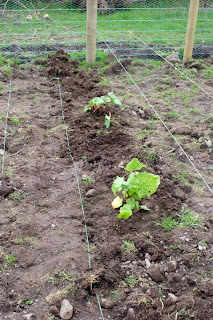 Two rhubarb plants rescued from Lidl and looking a little better than they were, believe me!!


The allotments have become a hive of activity over the last 2 weeks with everyone getting out and preparing their plots since the deer and rabbit fencing went up and so its become a great opportunity to meet our allotment neighbours. We met our next plot neighbour on Sunday, William and his little dog Sid who likes to chase stones, a very nice man who lives locally and was only too happy to give us all sorts of advice and is well clued in when it comes to growing veg. So he's become our allotment Guru and will I'm sure over the coming weeks get tired of us asking 'Do ya think that looks right?, how do we do this? can I borrow your bucket....again...' The well rotted manure also arrived on site and I've never been so excited about poo in my life, but it now graces the surrounds of the rhubarb plants upon the advice of William the allotment Guru. I'll be watching his plot like a hawk to pick up lots of tips.

News also seems to travel fast when you decide to grow your own veg. A colleague in work has his own plot up in Mayo, and kindly brought in 6 healthy young cabbage plants from a load of 70 or 80 he says he bought from a 'fella down the road' in Mayo for about 7 euro!!! Talk about a bargain!! So if our direct sown cabbage seeds don't do too well, at least we have some comfort in the knowledge that we will hopefully have 6 nice cabbages anyway.

The purple polka dot wellies finally came out over the weekend as we spent our first day on plot 103. Which is just as well, as my balcony is really getting ridiculous at this stage and Lady Isabella Harvey (the cat) has become increasingly indignant that a number of plants have taken over 'her' balcony. She promptly aired her grievances by digging up one of my window boxes and depositing not one, but two little surprises in my gazanias and busy lizzies!! 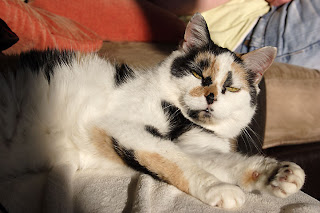 Her ladyship is not impressed!!! 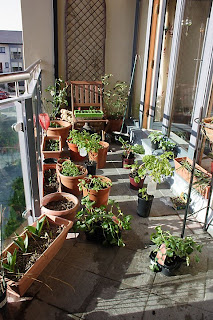 The Balcony in a ridiculous state!


On the plus side, THE SPROUTS HAVE SPROUTED!!! Broccolli is also poking its head above the surface but the few leeks I started off a 2 weeks ago in the tray have yet to make an appearance. 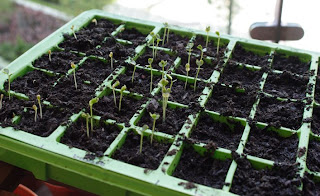 Well we couldn't have gotten a better weekend to get started. We got all the beds marked out and even got the onion bed dug and ready (I think!) for the onion sets to go in next weekend. We have strawberry, raspberry and rhubarb plants sitting on my balcony, (so far untouched by the cat but every now and then I catch her glaring at them!) so hopefully we'll get the onion sets in, and the beds prepared for the fruit bushes and if we're lucky another bed for the leeks. We found that the soil seems to be somewhere between nice loam and probably a bit sandy, which I think the strawberries will love. I also found one little grub which turned out to be either a chafer beetle grub or possible a vine weevil grub (fat white body with brown head). So if anyone has any tips on getting rid of them, answers on a postcard please! 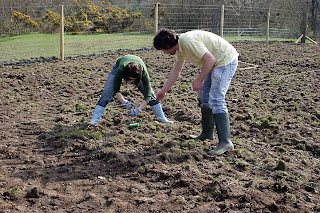 Jemma and Cillian hard at work marking out the beds. 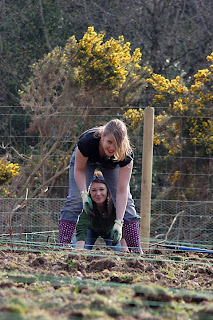 Me and Jemma digging away. 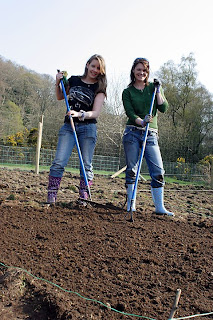 Well, lets start at the beginning, when a number of months ago, I contacted Dublin county councils to take on an allotment after my balcony turned into a jungle and the strawberry plants that dotted it last summer provided lovely strawberries but alas only about 8 of them!!! I was kindly told by the county council man, 'oh yes, we have 4 or 5 allotment sites in south dublin county council, you can go on the waiting list as number 187!!' At that stage I decided the hunt was on for a private allotment.
Serving my addiction to internet forums, I found one that was in the process of being set up in Roundwood Co. Wicklow through the garden plans ireland website. A quick text to a load of friends looking for someone to go in on it with me found that most were more than happy to just pilfer the excess produce but thanks to a drunken rant a number of weeks before about how people should grow their own, Jemma came to the rescue and wanted in!! And so it began!!
We took a trip down to the site and found the most idyllic location, in a valley in wicklow, flanked by a beautiful river and surrounded by birch trees typical of the wicklow landscape. I could already see lazy summer days, tending the vegetables, fishing by the river and throwing some nice fresh caught trout on the BBQ to go with some freshly picked greens!!!
So come last weekend Me (sharon), Jemma, Cillian and Eoin went down to sign the lease and officially take residence of plot 103. Fencing is still to be finished but the ground is rotorvated and the next few weekends will be dedicated to the back breaking job of laying out the beds, raking and manuring, and racing to get our onions in before we run out of time. So far, we have decided on what to grow and how its going to be layed out. Onions, garlic, leeks, spring onions, lettuce, spinach, rocket, chard, cabbages, cauliflower, broccoli, carrots, parsnips, beans and peas, sweetcorn, courgettes, rasberries, rhubarb, strawberries, and we're trying a purple pumpkin for halloween.
Now I know the above is extremely ambitious for first time allotment holders but hey, Bite off more than you can chew, then chew it. Plan far more than you can do, then do it. Hitch your wagon to a star, keep your seat and there you are! or so an old school teacher used to tell me. We'll give it a go for our first y 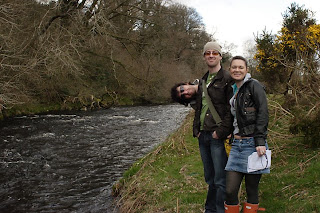 ear and consider it a learning experience!!


Jemma, Cillian and Eoin by the river at the back of plot 103. 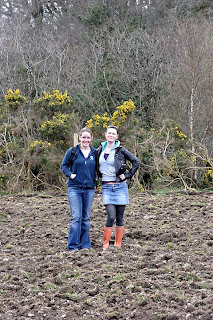 Me and Jemma, standing in plot 103. It will improve, I promise!!