We got some new pets!!.....well, actually about 1000 of them.... My Can 'o' Worms composter arrived today so we set about getting it set up and getting our new tiger worms settled into their new home. I haven't named them all yet but we're getting there. From now on, hopefully these guys will eat all of our kitchen waste, contributing to our green revolution, and turn all the veg peelings, egg shells and any other organic waste into lovely nutrient rich worm castings and compost for the plants. It will also provide us with 'worm tea' as any of the liquid that leaches out from the composting process provide a nutrient rich liquid plant feed which is apparently great for vegetables. 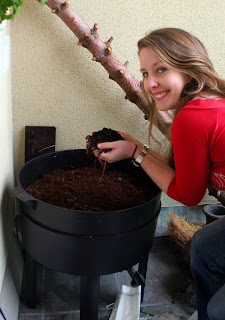 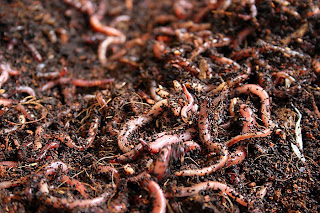 Lady Isabella Harveys nose, however, seemed a little out of joint now that she is no longer the only pet in the apartment. After running around like a lunatic looking for attention, she finally decided to sit in one of the tiers of the wormery and look at us as if to say ' look, I can compost too, If you want worms, I could be one!!' 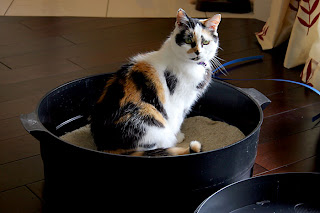 The time had come to try our chateau 103 elderflower champagne!! It had been fermenting away in the bottles for the last 2 weeks, thankfully without any explosions, so we popped open a bottle last night and it was deliciously fizzy and and delightfully sweet. Definately a success which we will be doing again next year. 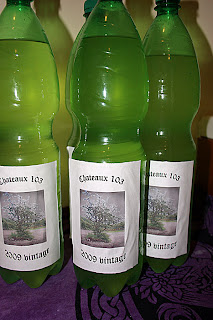 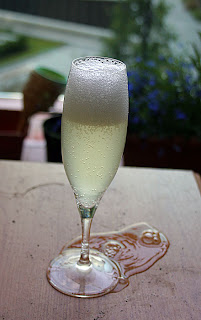 Our courgettes are in full bloom but only male flowers so far. Apparently this is quite common, the plant first produces a flush of male flowers and follows with the fruit baring female flowers. The flowers are apparently quite delicious stuffed and deep fried in batter, something I'll definately be trying over the next couple of weeks. 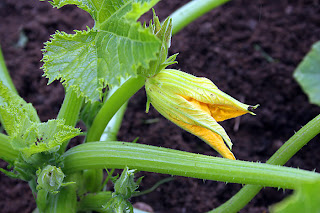 Or peas and beans are both setting their first pods so hopefully over the next couple of weeks we can begin harvesting them. 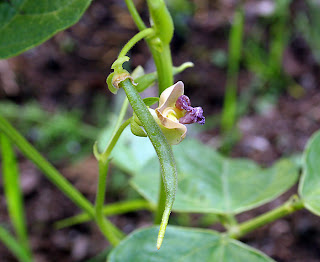 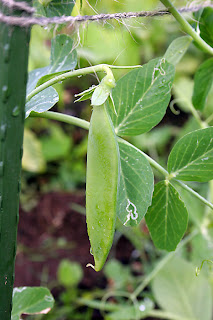 The carrots are starting to look like carrots and now when we thin them we are benifiting from some tastey morsels just big enough to eat sprinkled whole in a chicken salad and todays thinnings were absolutely gorgeous. Such a strong flavour for such a little pre-baby carrot, I can't wait till they get bigger. 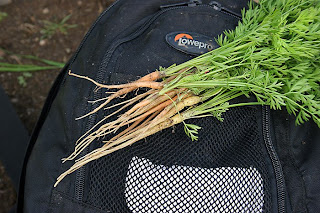 One of our cabbages unfortunately looks like it has black rot. Black rot is a Brassica disease caused by a bacterial infection of the plant. Apparently it can be carried by the seed or picked up from the ground. There is no cure and no prevention. It starts with 'v' shaped yellowing in between the leaf veins, after a while the veins begin to blacken and growth in mature plants is stunted and seedlings can be killed. As the disease seemed to have just started I pulled off the affected leaves in the hope that the disease may not spread to the rest of the plant. All other cabbages, and brassicas look so far unaffected but I'll be keeping an eye out. Apparently the disease is quite prevalent in warm wet summers, which we've certainly had over the last month or so. 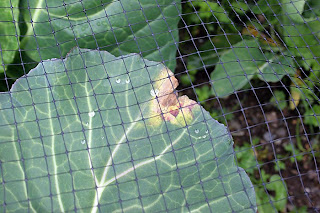 The not so humble spud!!

Things got very exciting up at plot 103 this weekend. I had my first firkle!! At the end of April, Val, our allotment neighbour gave us 2 seed potatoes to try. They were 'Aran' earlies and we had watched them flower 3 weeks ago with lovely purple and yellow blooms. On Saturday, while harvesting another small bowlfull of strawberries and raspberries (these went very well with some chocolate and coffee), Jemma and I got stuck in to firkling! We carefully removed a little of the soil around the potato mound and there it was.....our first spud staring back at us temptingly..... 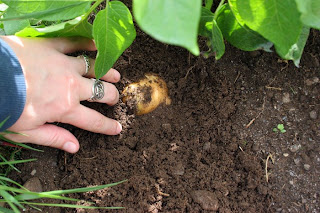 Then of course it started to pour with rain which kept us from harvesting until Sunday. Unfortunately the rain made work difficult up on plot 103 so only weeding was done and I put some fish blood and bone around the broccolli and lined each plant with some slug stoppa pellets. Some of the broccolli looks like its being nibbled on and there is no sign of catterpillars and the brassica beds are all netted, so with all the wet weather over the last couple of weeks the logical conclusion is slugs. But not to worry, Cillian and I are both off work for 3 glorious weeks after this friday and we are hoping to spend a lot of it up on the allotment.
On Sunday we were on a mission to harvest our first vegetable crop, our Aran spuds which seem to have blissfully escaped the blight. Unfortunately some potato plants up on the other plots have succumbed to blight after all the wet humid weather. We began quite respectably attempting to lift the two plants with a garden fork but as the ground is very stony Jemma and I were reduced to getting on our hands and knees and just digging out the spuds with our hands which was very exciting as we slowly unearthed one spud at a time and had enough from the two plants for a lovely dinner for the three of us. (Eoin unfortunately missed out this time as he had to work). 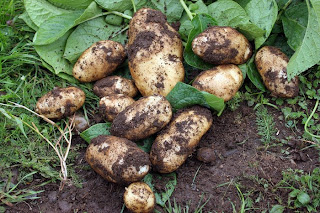 We were so delighted to find not one spud had been damaged by slugs, wireworm or any other potato pest or disease and were absolutely perfect with little or no eyes. I've never seen such perfect potatoes, creamy and unblemished and we realised how bad the quality of some shop bought potatoes are. We didn't insult these spuds by doing anything fancy to them, just boiled in their very light skins and served with a dollop of home made parsley butter. 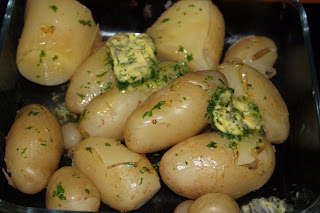 They tasted 10 times better than shop bought, and for the first time we really tasted the 'earthiness' people talk about when describing the flavour of potatoes, it was almost perfumed with the flavour of what I can only describe as 'greenness'. My faith is renewed!!! When we started at plot 103 I wasn't overly pushed to put in many potatoes as having been brought up with a portion of potatoes nearly every day at dinner, like most Irish people, I had grown sick of them and I don't eat them very often anymore. But there was nothing humble about these spuds and we're now looking forward to our roosters which should be ready in early Autumn and are growing away tall and strong. Next year we'll dedicate a lot more space to our not so humble spuds, they seem to like it up at Annamoe allotments.

On the Salads front, our lettuce has clearly decided to give us the 2 fingers and has joined the electricians on strike!! They have made it perfectly clear that they just do not like our acid soil with few nutrients so I fear that this year we may have to consider them one of our failures and concentrate on preparing the beds properly for them next year. We'll lime the soil to sweeten it for them and pack it with lots of manure and compost over the winter and try again next year. These are salad bowl (a cut and come again type), ice queen (an iceberg type), rocket, and a type of butterhead who's name I can't remember. They were sown around the second weekend in May and should be much further along at this stage if not nearing harvest, but they've just decided they don't want to play this allotment game and really haven't put on any growth staying tiny. The spinach we sowed around the same time has bolted and gone to seed before it reached 4 inches in height, also on strike. 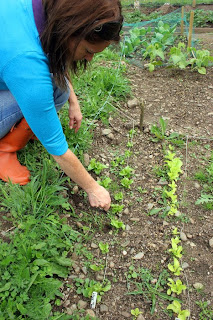 On the balcony at home there is a flush of colour at least as my tiger striped gazanias, having survived lady Isabella Harvey's (the cat) onslaught, have opened up and sit pretty among the deep blue lobelias. My roses are also in bloom but unfortunately I'm still waiting on my summer Jasmine to flower. Summer is most definately here. 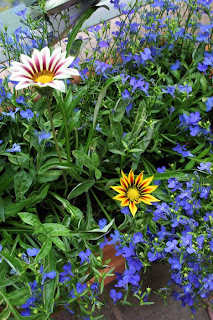 We finally got our first crop of 2009 from plot 103!! its getting exciting watching everything start to look like vegetables and fruit. We arrived down to plot 103 to find a few strawberries and raspberries were ripe for the picking. Beneath the plants were a few succulent fruits dotting the place with bright reds!! 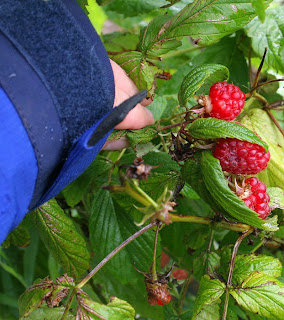 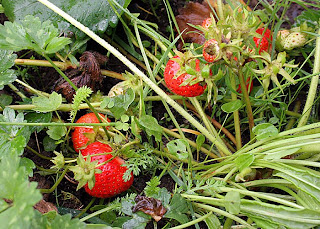 Some had succumbed to mould unfortunately due to the warm, humid and wet conditions over the last week and many of the raspberries had been eaten by the birds but we only put two raspberry plants in this year and weren't expecting a particularly large crop but there were certainly a few tasty morsels. We put squares of weed suppressing membrane around the 12 strawberry plants to act as little mats or collars to prevent the strawberries still forming from resting in the mud and rotting. Heres todays few fruits, granted some of them wouldn't win a beauty contest or quite make the 'tescos finest' uniformity test but they were thoroughly enjoyed with some fresh whipped cream and apple tart this evening. They were much sweeter than the ones we are used to in the shops and weren't quite so sharp. 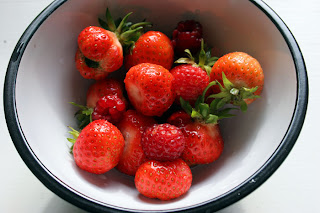 The heavy rain followed by sunny spells over the week meant everything took a good growth spurt. Some of our first cabbages look like they are starting to form hearts. 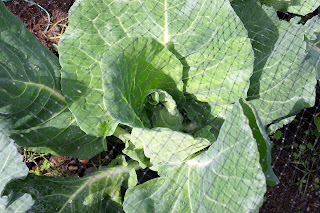 The beans have thankfully made a full recovery, looking healthy and green they are even starting to bud with their first flowers. 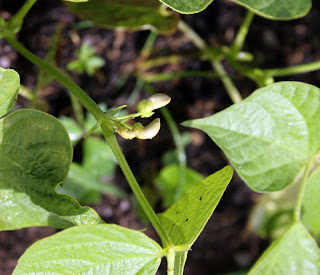 Even our onions appear to have lost their yellowing tips due I'm sure to both the heavy rain and the feeding with seaweed extract and chicken manure. Pumpkin and courgette plants are really starting to bulk up. Unfortunately as all of our veg have taken a growth spurt, so have the weeds. We decided next year when we prepare the beds we will grow as much as we can through weed suppressing membrane.
Our elderflower champagne experiment continued during the week. After 3 days fermenting in the bucket a very faint fizzing could be heard when you stirred it. After 5 days fermenting in the bucket we bottled it on Friday into some plastic screw top sparkling water bottles. Although the recipe on the river cottage website recommended glass swing top or grolsch type bottles we decided against it. A number of people who had tried the recipe posted up warnings of exploding bottles due to the pressure buildup as once bottled, the brew must ferment for at least a further 8 days. Some exploded with such fervor they were referring to it as WMD brew!!! Others told stories of batches of the champagne exploding in their sheds and glass shards embedding in the roof and walls!!! So for the sake of safety, I decided that plastic bottles was the way to go. At least if it does explode there will hopefully be less fallout! The screw caps also allow some of the gas to be released over the additional fermentation stages. I've been releasing the pressure in the bottles once a day and its very obvious that the wild yeast in the flowers is continuing to do its job happily fermenting the sugar into alcohol and producing all those lovely bubbles as if fizzes with a gorgeous smell when I loosen the caps briefly. I can't wait to try some. We did try some of the elderflower cordial with some sparkling water and it was quite nice if not a little too sweet. Next time I think I'll reduce the sugar content. The cordial is now frozen into ice cube bags for use as needed.
Posted by sharonl at 14:15 2 comments: