Well, it looks like we're gonna need a bigger freezer! We've found we're in the position where we have to start thinking about how to manage a glut of vegetables. All of our broccoli and cauliflower came to fruition at the same time more or less, far too much for us to eat fresh so I've broken out the freezer bags and got to blanching and freezing our veg for eating over the coming weeks. Next year we can resolve this problem by 1)Buying another freezer! and 2) sowing successionally from early in the season right through with a number of different varieties of veg, not just the one or two. Unfortunately due to getting the plot very late in the season, we couldn't do that this year, but next year we will begin sowing in early February and continue through the season so we should hopefully begin harvesting from May onwards right up until Winter. 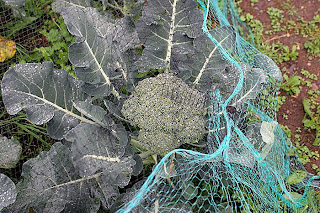 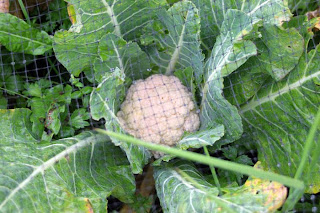 Our sprouts are really trying to burst out of their cage of netting and you can see the beginnings of little sprouts forming at the intersection between the leaves and main stem. I have high hopes for out brussels sprouts this year, they seem to be growing healthy and tall, with no sign of any diseases or deficiency, so heres hoping for homegrown sprouts for christmas dinner. This picture was taken the weekend before last, and since then they have started to push the netting right up and look packed underneath. 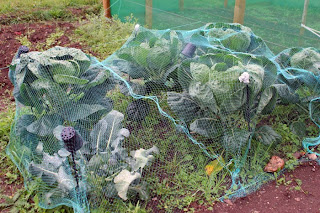 Our onions are finally bulbing up a little. We sowed them around the 26th April and so far they haven't exactly thrived, probably due to the poor soil, and the leaves have grown relatively small in comparison with everyone elses, with slightly yellowing tips but other than that they have faired ok. Many other peoples onions up on the allotments have bolted and gone to seed and I'm wondering perhaps we did the right thing not manuring the onion beds that late in the season. Yes the growth hasn't been as lush as some other peoples onions, but they haven't bolted or gone to seed and seem to be bulbing up now. The veg growing books I have recommend a growing time of 22 weeks for onions growing from sets which would mean we are pretty much right on schedule to have our onions ready by the end of september. If too much manure is added too late in the season onions can bolt and go to seed as they grow too quickly in the rich manure. I believe the general rule is you manure in the Autumn and lime in the late Winter so this year we will manure the beds around October or November, allow the winter weather to break it down and settle the nutrients into the soil and then come January or early February, we will lime the beds we didn't do this year. Hopefully between this and growing as much of our veg as possible through weed suppressing membrane next year, and successional sowing, we should have even more success with our veg next year. 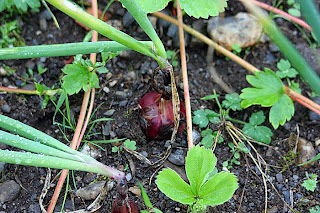 Our sweet corn is finally putting out male flowers, I'm hoping its not too late in the season to get cobs, (I suspect it may be!) but the seed pack did say harvest from end of September to October so theres still hope yet. The sweetcorn has shot up and looks tall, strong and healthy. 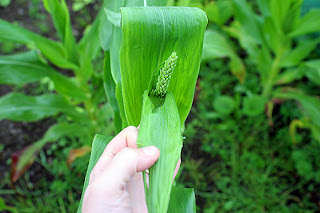 Now that our broccoli and cauliflower is pretty much done, the next thing we are looking forward to is our cabbages. We had one pointed cabbage and one savoy ready for picking and another 15 or so cabbages we hope will be ready over the coming weeks. Unfortunately I sense another glut coming on and I'm not quite sure cabbage takes to freezing as well as cauliflower and broccoli so any ideas on what to do with excess cabbage? Answers on a postcard please! (or in the comments section.) 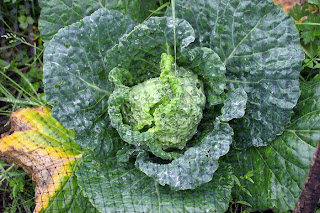 Our pumkins are making a break for freedom!! I definately underestimated quite how much pumkins spread out. Our plants are putting out vines all over the place! here you can see one of them making a B line for the sweetcorn. The traditional native American Indian way of companion planting is to plant pumkins, sweetcorn and beans together and I can certainly see the pumpkins have an affinity or affection for the corn. This vine is about 6 feet long and is budding with new flowers. Traditionally the pumpkins are grown around the base of the sweetcorn which suppresses weed growth due to the enourmous pumpkin foliage. Beans are planted around the base of the sweetcorn and use the height of the corn to climb up and the flowers from the bean plants attract bees and insects to pollinate the flowers of the pumpkins. So the three veg, or holy trinity, all help each other out and there you have it! Companion planting at its finest.....in theory..!! We'll try this way of planting next year and see how it works. In the meantime with our pumpkins making a break for freedom we just do our best and hope for pumpkins at halloween. Below you can see one plant edging towards the sweetcorn, and another climbing through the deer fencing trying to escape towards the river!! 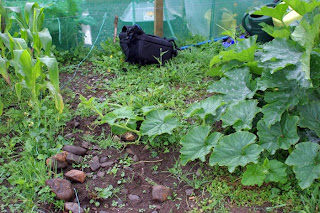 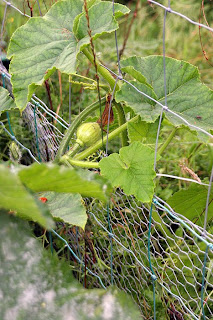