Not only the name of one of my favourite vegetarian/vegan cafes in Dublin city, but also the glorious scene we arrived to at plot 103 last weekend. Our broccoli, cauliflowers, more beans, peas and another courgette were ready for harvest! 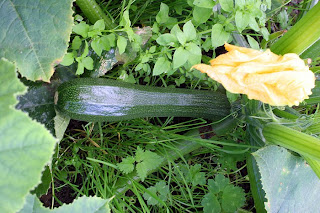 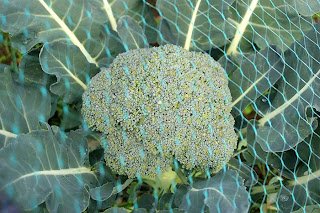 Our chard bright lights was looking delightfully colourful and I really hope it tastes as good as it looks! 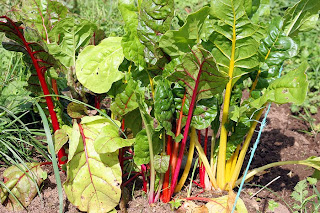 I'm not quite sure but I think we may have the first pumpkins showing a hint they they are going to turn up on plot 103 for halloween. 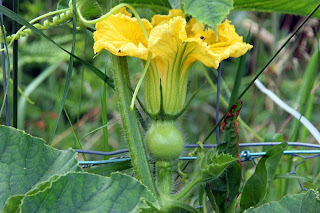 However celebrations weren't to begin just yet. We had a look at our potato bed and in the space of a week all the plants had deteriorated drastically with confirmed blight. Once it strikes unfortunately theres not much you can do but try and prevent the blight spreading to the tubers in the ground and rotting the potatoes. So we cut down the foliage to ground level, earthed the mounds up and I dug up 2 of the plants to see if there was any hope of salvaging some spuds. The roosters are small but thankfully no sign of blight in most so we'll leave them in the ground for another week and then just harvest what we can of them. Unfortunately with the foliage cut back there is no possibility of the spuds getting any bigger so the best we can hope for is baby roosters. It would seem that most peoples potatoes on the allotments succumbed to blight including William the allotment guru who generously gave us a rather large bag of his spuds, british queens. (Thanks William, they were very tasty!!) 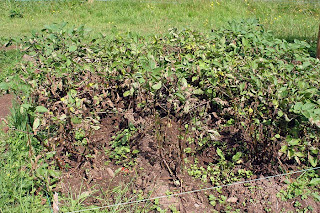 Overall not a bad haul at all though up in plot 103. This is the beautiful table full of food we managed to harvest and provided us with plenty of veg for the week. The broccoli and cauliflower went into a very tasty broccoli and cauliflower gratin and tasted absolutely fantastic. For the first time we discovered just how cauliflower is supposed to taste and it was surprisingly different from the shops, not quite so bitter and much sweeter. The heads are small but his is probably due to the lack of manure in the soil this year and can be fixed for next season. I loved it before but now!!! I'm an addict! 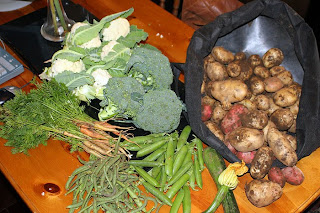 Finally I had plenty of opportunities to continue my rehabilitation programme to eliminate my fear of butterflies. The plot was crawling in them!!! There are so many up there now we are very glad we put nets over our brassicas, but even so one or two still managed to get in as we found a couple of stray caterpillars in the broccoli (thankfully before I cooked them!!) theres nothing worse than enjoying the wonderful taste of home grown food only to look down on your plate and see half a caterpillar!! So heres a picture of one of the butterflies sunning itself on one of our marigolds around the pea and bean bed. I have to say, with so many butterfies flitting about I have definately begun to run slightly less, I didn't really have much choice, if I ran away from one of the fluttering monsters I ended up running into another 2 of them dancing in the air so in the end I just gave up running and closed my eyes momentarily instead. I think my rehab plan is working!!! 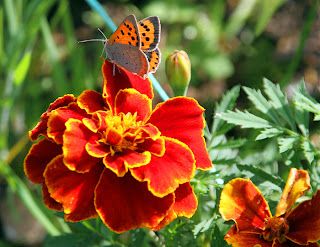